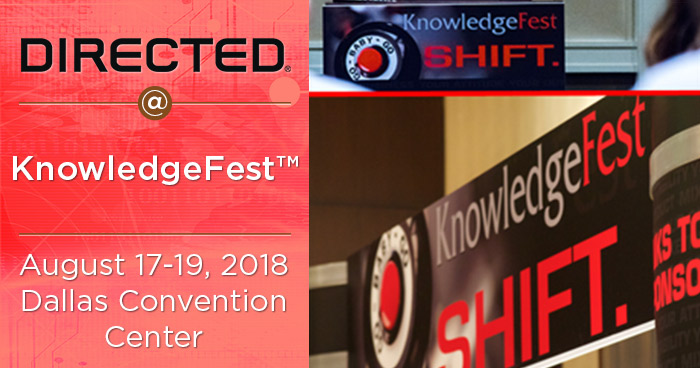 Directed Exhibiting and Training at Knowledgefest

VISTA, Calif. (July 30, 2018) – Directed is pleased to announce it will be exhibiting and training at Knowledgefest at the Dallas Convention Center from August 17th through 19th. Four technical training slots will be available for all Knowledgefest attendees. Attendees can find out what’s new with Directed by visiting Booth 508 where they’ll be treated to the latest on DS4, Viper Powersports, and the newest release from the connected car line of Viper SmartStart products.

Directed’s booth will showcase the “Race the CEO Challenge”. To show how simple and fast a DS4 installation can be, Directed’s CEO Bob Struble asks all attendees to participate in the install race and try to beat Bob’s time. Directed’s Race the CEO challenge will be available during all show floor hours.

Directed Product Specialist Representatives Justin Gear and James Winning will brief attendees on the latest technical updates on Directed’s evolving product line. They will be covering DS4 and highlighting Directed’s new Bluetooth siren. They’ll also be talking about Directed’s new Viper Powersports offerings - including Security and GPS systems - in the four class sessions offered over the three-day event. All training attendees will receive a Directed giftbag full of Directed swag and as an added bonus there will be giveaways of Denon headphones and Bluetooth speakers.

To show appreciation for visiting its booth, Directed will be raffling off three Denon / Definitive Technology sound systems. Come by the booth for more information.

According to CEO Struble, “With our return to Knowledgefest, Directed is confirming our industry leadership in product innovation and support.”

Training sessions are scheduled as following: